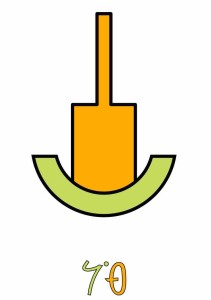 In the Astroshamanic Binary System Sun in Virgo (6) and Moon in Cancer (4) constitute Binary 6.4, or Binary number 64. This is a blend of mutable Earth and cardinal water, mixing Virgo’s efficiency, purification, selection and service with Cancer’s sensitivity, compassion, protectiveness and tenacity.

This combination offers major nourishing, serving, healing and caring energies which can express both in tender and pragmatic ways. Imagination and intuition is here firmly grounded in everyday reality, allowing manifestation of intentions and providing support for concrete implementation of goals.

This binary has an inward spontaneous capacity to grasp the tangible value of things and create successful conditions in any environment, as long as it is not affected by excessive shyness, withdrawal or instability. In order to function at its best Virgo/Cancer requires some adherence to traditions, protocols and the security of guidelines.

When the waning Moon is in Cancer at 60° from the Sun in Virgo, the phase of Balsamic Moon, or Waning Crescent Moon, starts. It is a crucial receptive phase, a time of healing and rest, yet also of intense preparation and completion. Here you prepare for a new cycle, the next New Moon, and let go of the residues of the old. What is mainly needed in this phase is a work of release and forgiveness. It is easy at this stage to feel restless, excited or willing to change everything and start doing something totally new and unpredictable Yet, until you learn to release the grievances recycled from the past, you will never truly create anything new. The question here is: “What do I release? What do I take in the next cycle?”

Astroshamanic Seal: a horizontal semi-circle surmounted by a rectangular shape moving upward as a line. This seal provides security and protection in the physical and third-dimensional reality aligning it with the multidimensional and spiritual levels. It provides awareness that everyone and everything on the physical plane is working for the same Function. When this awareness is available the whole physical universe works with you. Wherever you go there is security and protection.

Werner Herzog 6.4 (5 September 1942) German director “Do you not then hear this horrible scream all around you that people usually call silence.” “Jeder für sich und Gott gegen alle” “I believe the common denominator of the universe is not harmony; but chaos, hostility and murder.”

Antonin Artaud, 6.4.7 (4 September 1896) French playwright, poet, actor and director. “There is in every madman a misunderstood genius whose idea shining in his head frightened people and for whom delirium was the only solution to the strangulation that life had prepared for him.”

Ingo Swann, 6.4.5 (September 14, 1933) psychic, artist, and author known for being the co-creator, along with Russell Targ and Harold Puthoff, of remote viewing, and specifically the Stargate Project.

State of Frams, Nation of Salifrad – 6/4

Salifrad is the furthest south-west emanation of the State of Frams, bordering a trinity of States (Quald, Brento and CTP). Its institution is the result of developments occurred in age 3 aimed at providing a sea outlet to the State of Frams. Part of its territory constitutes previously an integration healing area under the administration of the State of Quald. Salifrad still keeps a close devotional connection with Quald, and its sanctuaries are often the goal of pilgrimages for Qualdian people. Salifrad is best known for its amazing drums.