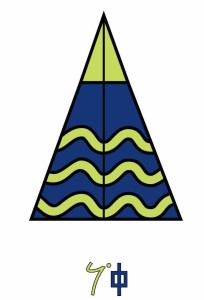 In the Astroshamanic Binary System Sun in Virgo (6) and Moon in Capricorn (10) constitute Binary 6.10, or Binary number 70.

The pattern Sun in Virgo and Moon in Capricorn (6.10), a blend of mutable Earth and cardinal Earth, mixes Virgo’s efficiency, purification, selection and service with Capricorn’s ambition, discipline and determination.

Those who align with this combination have a most grounded nature and strong discriminating, realistic and analytical capacities. Their power of focus and concentration is unsurpassed in whatever relates with the practical and material reality. In this field they nourish huge ambitions, which they are willing to serve relentlessly, setting and accomplishing short, medium and long term goals. The integrity, commitment and dedication they devote to their purpose provide a sense of extreme reliability and inevitable success.

Two days after the First Quarter, the Moon is in trine, 120° angle to the Sun (Gibbous Moon). It is an integration phase, a time of receptivity and pause when, unless there are other issues at work, things tend to glide in life. If you have productively used the energy of the previous phase, now you can gather the first fruits. It is not usually an ideal moment to act or force situations. It is a time of preparation aimed at reviewing past actions, considering information related to what was established at New Moon, and filtering all data. The question here is: “How can I put together all the different pieces of the puzzle? What needs to be refined or discarded?”

Astroshamanic Seal: a triangular shape with three wavy lines in the lower part. This seal is associated with multidimensional contracts and the manifestation of pragmatic result involving close cooperation with supporting beings. Such contracts aim at bridging and healing the fracture between the human separated reality and the multidimensional realms, retrieving lost memories and paving the way for future beneficial developments.

Theodore Dreiser, 6.10.7 (August 27, 1871 – December 28, 1945) American novelist and journalist. He pioneered the naturalist school and is known for portraying characters whose value lies not in their moral code, but in their persistence against all obstacles.

Jens Gad (26 August 1966 in Munich) German producer, songwriter and guitarist, he has released albums under the name of “Enigmatic Obsession”, “Jens Gad Presents”, and “Achillea”,

Lââm, 6.9 (1 September 1971 in Paris) French female singer and actress of Tunisian descent. She has sold more than 500,000 albums and more than 2 million singles.

This nation is located in the central south-east portion of the State of Frams, bordering the State of Quald in the south. It is a mainly mountainous territory, also characterised by vast caves and a large plain area. Its capital is Subalfalak, whose main features are its huge serpent shaped valley and underground caves. A most relevant centre is Sphinx in 6.10.6, with one of the most prominent templar sites in Frams.