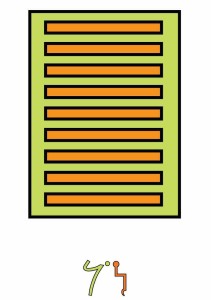 “When you really know somebody you can’t hate them. Or maybe it’s just that you can’t really know them until you stop hating them.” ― Orson Scott Card, born August 24, 1951, Sun in Virgo, Moon in Gemini.

In the Astroshamanic Binary System Sun in Virgo (6) and Moon in Gemini (3) constitute Binary 6.3, or Binary number 63. This is a flexible blend of mutable Earth and Air, mixing Virgo’s efficiency, purification, selection and service with Gemini’s lightness, playfulness, versatile communication.

Those who resonate with this combination have swift, analytical, flexible and sparkling mind, able to acknowledge in full details what constantly goes undetected by the majority of people. They have the capacity to shape-shift into different roles, carrying them all with great competence, and can easily explore alternative worlds, while remaining well grounded in ordinary reality.

“Supposing you knew — not by sight or by instinct, but by sheer intellectual knowledge, as I know the truth of a mathematical proposition — that what we call empty space was full, crammed. Not with lumps of what we call matter like hills and houses, but with things as real — as real to the mind.” (John Buchan, 1st Baron Tweedsmuir, born 26 August 1875, Sun in Virgo, Moon in Gemini, Ascendant in Leo, Scottish novelist)

Spirits aligned with 6.3 are excellent communicators, instinctive learners with a craving for information, which may at times appear as too encyclopaedic due to the large variety of topics involved. Because they are also determined to give concrete form to their research and explore intricate details, their work can achieve significant levels of depth, while at the same time being accessible also to the layman. Due to their mental primary involvement and their ceaseless nervous activity, emotional interaction may not be their preferred arena.

Both Virgo and Gemini are ruled by Mercury, the herald of the gods. Gemini is related with the communicative nature of Mercury, while Virgo is associated with the healing function and down-to-earth information. Gemini’s has plenty of ideas, while Virgo has abundant facts and the capacity to implement Gemini’s ideas, as long as it does not get stuck with details, which is a thing that Gemini helps to avoid.

Hands are a major feature in this and in all other Gemini binaries. Hands represent the primary communication and linking device, preceding any other form of language. This is an invitation to be aware of the interaction of your hands, bringing consciousness in their expression. The same applies to your arms, lungs and breath, all Gemini related. Clapping hands, and allowing the clapping impulse to emanate from the intestine is a most powerful exercise for enhancing Virgo/Gemini potentials. It is also a practical way of promoting assimilation and release. This is a flexible blend of mutable Earth and Air, mixing Virgo’s efficiency, purification, selection and service with Gemini’s lightness, playfulness and versatile communication.

Astroshamanic Seal: a rectangular shape with nine horizontal lines, representing a scroll. The vision involves a large bird holding a scroll with horizontal lines containing writings with very small fonts. These lines are indeed gaps and I enter through one of them. I emerge into a new landscape with plenty of light and an ample variety of valleys, resembling waves of different natures and sizes. These valleys represent all the zodiac sectors, including further subdivisions such as binaries and trinities. Here all is included and united, it is not possible to separate, everything is connected and effectively communicate. I ask how it is possible to implement such connection. “It is about firmly remaining in the Centre, connected with the Guide, activating their embrace whenever this is needed, operating with lightness and cleverness, dodging the tricks of the separated mind and its decoys. Move on and simply allow one valley to follow the other. Create circles, since through the circles it is possible to experience this.”

John Buchan, 1st Baron Tweedsmuir, 6.3.5 (26 August 1875) Scottish novelist, historian and politician, Governor General of Canada. How if Space is really full of things we cannot see and as yet do not know? How if all animals and some savages have a cell in their brain or a nerve which responds to the invisible world? How if all Space be full of these landmarks, not material in our sense, but quite real? A dog barks at nothing, a wild beast makes an aimless circuit. Why? Perhaps because Space is made up of corridors and alleys, ways to travel and things to shun? For all we know, to a greater intelligence than ours the top of Mont Blanc may be as crowded as Piccadilly Circus.

Orson Scott Card, 6.3 (August 24, 1951) American writer known for his science fiction – Ender’s Game (1985) and its sequel Speaker for the Dead (1986) – and as a political commentator and as an advocate for The Church of Jesus Christ of Latter-day Saints, of which he has been a lifelong practicing member.

Richard Ashcroft (September 11, 1971 in Billinge Higher End, Lancashire) English singer-songwriter. He is the lead singer of The Verve,

Ivano Fossati, 6.3.7 (21 September 1951) Italian pop singer from Genoa. He was a member of the progressive rock group Delirium

John Cage, 6.3.6 (5 September 1912) American composer. If you develop an ear for sounds that are musical it is like developing an ego. You begin to refuse sounds that are not musical and that way cut yourself off from a good deal of experience.

Florence Welch (28 August 1986 in Camberwell) British singer-songwriter, best known worldwide as being the lead singer of Florence and the Machine.