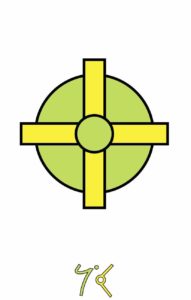 In the Astroshamanic Binary System Sun in Virgo (6) and Moon in Leo (5) constitute Binary 6.5, or Binary number 65.

Expressing your talent of power means to do what you truly love and allowing it to become your work. In this way work does not involve any sacrifice, duty, effort or compromise. It becomes a sheer expression of your love, as everything you do and are. Whatever you need in life, including money and material goods, come to you abundantly as a response to this love.

This binary mixes Virgo’s efficiency, purification, selection and service with Leo’s vitality, creativity and leadership. Those who align with this combination receive the capacity of operating as meticulous workers or devoted servants, while at the same time functioning as stars or leaders, either in the sheer limelight or slightly in the background.

They cherish grandiose schemes in their hearts, yet holding the determination to work painstakingly and unwearyingly in order to attain them. Their attitude to work is in the main playful, radiant and creative, emanating huge power and purity, making them a great source of attraction and inspiration.

This binary comes right before the New Moon in Virgo (6.6), celebrating the climax of assimilation and release that precedes the upcoming lunation. Hence, this combination involves an attentive activity of discrimination between what is valuable and what is not valuable according to one’s pragmatic intent.

This is a crucial time aimed at making sure that all the residues and resources of the previous cycle are completely dealt with so as to sustain the imminent Virgo lunation. The way of carrying out this task is provided by the interaction of Virgo and Leo, which is physically reflected in the relation between intestine and heart.

With 6.5 it is helpful to let Leo play a significant role in the process by making the work light-hearted, creative, pleasant, entertaining or, if necessary, even dramatic and ritualistic. This makes it an ideal time for celebrating a Basic Ritual of the Sacred Cone.

An attitude of generosity, optimism and confidence is recommended when Virgo and Leo are involved, both in the receiving and release stage. In this respect this could be an ideal time to get rid of what no longer serves you in a practical way. For example, you can scrutinize your possessions and consider those things that you are not using anymore or that you have never used. If you realise that you are not truly willing to use those materials, kindly let go of them. You could find somebody that can purchase or swap them with something that you would like to receive. You could also generously donate them to somebody that needs them, offer them to a charity or even throw them away.

When the waning Moon is in Leo at 30° from the Sun in Virog, this is the final part of the phase of Balsamic Moon, or Waning Crescent Moon, the completion of the lunation cycle leading to the New Moon. It is a crucial time of release and healing, leaving space for whatever need to be ultimately completed or let go of before moving on to another lunation. The main focus in this phase is a work of release and surrender. At this stage it is possible to feel confused, overwhelmed and face crisis. It is a process of major fermentation, in which it is vital to hold a sense of purpose, while also accepting uncertainty and nebulosity as part of the process. The question here is: “What do I release? What do I take in the next cycle?”

Astroshamanic Seal: a circle with a cross and a smaller circle within. This seal enhances storytelling and singing, the capacity to convert words in songs. The seal also promotes the expression of your true talents of power. Expressing your talent of power means to do what you truly love and allowing it to become your work. In this way work does not involve any sacrifice, duty, effort or compromise. It becomes a sheer expression of your love, as everything you do and are. Whatever you need in life, including money and material goods, come to you abundantly as a response to this love. Your ego identity, the attachment to the bogus idea you have of yourself prevents you from expressing your authentic talent and who you truly are. This attachment makes you feel afraid of what other people may think of you, of how they will react. They may judge, tease or even leave you. Yet the obstacle is not other people. It is your idea of them, which comes from the bogus idea you have of yourself. Letting go of this idea is the only way for expressing your authentic talent. In this way you will become who you truly are, and other people will also do the same.

Ludovico Ariosto (September 8, 1474 – July 6, 1533) Italian poet. He is best known as the author of the romantic epic poem Orlando Furioso

Sir William Gerald Golding, 6.5 (19 September 1911) British novelist, poet, playwright. The thing is – fear can’t hurt you any more than a dream. Maybe there is a beast… maybe it’s only us.

State of Frams, Nation of Sarkyrie – 6/5