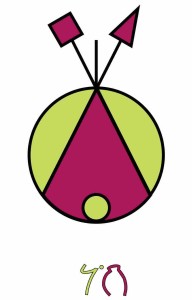 In the Astroshamanic Binary System Sun in Virgo (6) and Moon in Pisces (12) constitute Binary 6.12, or Binary number 72.

This is a blend of mutable Earth and mutable Pisces. Mutable signs constitute the bridges between dimensions. They have the capacity to move through major zones of transformation and adapt to the necessary change. Here 6.12 is the decisive trespassing zone, the ultimate binary!

This pattern mixes Virgo’s efficiency, practicality, purification, selection and service with Pisces deep intuitions, art, compassion and inspiration. Virgo focuses on assessing and sifting resources, finding the most effective and pragmatic tools, while Pisces surrenders to the flow of spirit guidance and the waves of imagination. Virgo is the most technical, rigorous, detailed and methodical sign of the zodiac, whereas Pisces craves for transcendence and blooms in nebulousness, ambiguity and paradoxes.

Virgo’s perspective covers the infinitesimal realm, limited to single parts of a specific dimension, while Pisces’s perception embraces the immeasurable and multi-dimensional, with all parts being included and related to the whole. Virgo relies on competence, analysis, precision, rationality, discrimination and is concerned with the ordinary and mundane aspects of life. Pisces is idealistic, indiscriminate, illogical, vague, and chaotic and is aligned with the non-ordinary and visionary realm.

The Virgo’s Sun is analytical, methodical, with an acute mind which needs to adhere to clear patterns of thought, whereas the Pisces’s Moon abides in a realm of emotions and fantasies, devoid of intellectual structures.

Those who resonate with 6.12 have profound and analytical minds, which allow them to delve into the realm of most paramount emotions and nebulous states of consciousness. They have the capacity to compassionately balance multi-dimensional insights and healing powers with practical everyday activities. This makes them very popular, although it is part of their nature to remain in the background. Hence they need encouragement and feedback from those they serve in order for their work to continue.

Full Moon in Pisces confronts us with the opportunity of reconciling two conflicting, yet most complimentary, Sectors into their original unity.

The Full Moon in Pisces is the climax of the New Moon in Virgo. The degree of the New Moon, or Lunation point, indicated an area of life that would operate as Intent and driving force during the cycle, reaching the apex at the Full Moon. In astroshamanic work this position is first identified in the natal chart by noticing in which house is located and if there are planets nearby. The next step involves establishing a direct rapport with the Lunation Point. For example, you can position yourself in the related sector, opening up, taking note of whatever calls attention, no matter how trivial or distracting. In this context body symptoms have priority. This means that you can start from anything that you perceive relevant in the body, and then allow it to link with all the related visionary associations. In the end write down what happened.

On a Full Moon you employ the same process and check where the degree of the Full Moon fits into your chart and then enter its parallel position in the Sacred or Spirit Circle. This is the climax point of the 6.6 New Moon binary.

At New Moon, both the Sun and the Moon are conjunct. Hence, they are in a condition to experience their pristine unity and formulate a common Intent. On a Full Moon whatever was conceived and experienced during the New Moon, calls for direct exposure and accomplishment. Hence, this is the moment when I confront myself with the practical implications of the New Moon issues. This is the time for Virgo manifestation, resolute discrimination and selective action! The major dynamics of this process will however be active also at least one day before and after exact Full Moon. This frame of time inevitably confronts with the sphere of relationships and whatever has remained unconscious or incomplete in that domain.

Astroshamanic Seal: a large circle including a triangular shape, suggesting a tent, and a small circle. Three elements protrude out of the upper side of the circle. The girl of the tent takes care of her abode and her Beloved, waiting for him in the temple of dreams. The girl and I, together with the Guide, take a boat and reach the village, where celebrations are taking place. I embrace the girl of the tent and bestow my love. We are all united in the village and everyone has their place. The connections are clear as crystal. This seal provides this awareness. Here you can find your place in the Whole. Everyone finds their place and the sense of their life. Then celebrations stop and the village gather in council. Everyone share their dream: the dream of their life. Then each one is asked if they are ready to work to manifest that dream. The spirit of this seal in the relentless and enduring dream worker. It serves all those who intend to make their dreams real.

Handorian States Reference:
State of Frams, Realm of Sanbenuem – 6/12
The Framsian Nation of Sanbenuem is located in the north west area of the Handorian State of Frams. The capital is Salim. Sanbenuem borders a considerable part of Urkuram. Urkuram is an area where previously three and currently four nations – Sardamt (6.7), Sanbenuem (6.12), Falcon (6.1) and later Frangas (6.6) – converge. Urkuram was a remote frontier land encompassing a trinity of nations. It was a zone of oblivion, an ultimate edge, which none of the three nations was willing to own as part of its territory. This was due to the fact that Urkuram seemed to be the abode of a most ferocious fiend. It was a horrible creature which caused huge sufferance, illness and terror to the villagers and to whoever happened to be in Urkuram. Once Kurandah’s miraculous deeds achieved immense popularity, the nation of Frangas established an exclave next to Urkuram. Later Urkuram became an autonomous zone (the Capital Holy District of Urkuram) under the special jurisdiction of the State Capital of Frams.