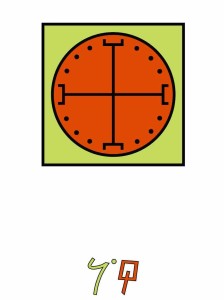 In the Astroshamanic Binary System Sun in Virgo (6) and Moon in Taurus (2) constitute Binary 6.2, or Binary number 62.

This pattern mixes Virgo’s efficiency, purification, selection and service with Taurus’ determination, patience, stability and delight. Those who resonate with this combination have a very grounded and pragmatic nature, providing a solid sense of stability, integrity and reliability. They have the faculty to relentlessly pursue any job or task until it is totally and impeccably completed. Their innate understanding of how the physical world functions spontaneously allows them to move on the planet with endurance, patience, discipline and ease.

The gift of this combination is that it knows how to pace itself in order to avoid the burnout that may potentially hit other Sector 6 binaries. This binary is also related with the sacred mysteries of deep and innocent sensual interaction.

This binary is a Disseminating Moon or Waning Gibbous Moon binary, which is traditionally a receptive time, when existence may either ask or offer something. This makes it an ideal moment for tuning in to the original Intent and operating accordingly. What you have put in motion, needs to be concluded with integrity and commitment. When you do not complete your creative cycles you tend to separate yourself from the flow of life and feel confused or depressed.

Once we have received repeated confirmations that a course of action is right, and even taken some initial steps in that direction, doubts may assail us. Yet, what you have put in motion needs to be concluded with integrity and commitment. When you do not complete your creative cycles, you tend to separate yourself from the flow of life and this brings confusion or depression.

If our ideas and visions are truly transformational and decisive for our life, we cannot expect to be devoid of fear when we are faced with taking action. As a matter of fact, the fear is mainly there to warn us that we have reached the critical point, when we need to move from the realm of ideas into the pragmatic reality. This is an edge, and is important not to be alone here. It is essential that we rely on the presence of a higher power.

Given the earthy 6.2 nature of this Disseminating Moon, there is something that needs to be openly manifested and practically done, with diligence, determination and dedication. It is not a time for emotional expressions or intellectual disquisitions. This is the opportunity to go beyond the traps of conventional self-consciousness, taking a leap into your pragmatic gifts and giving outer form to your Intent.

Virgo and Taurus are in a trine aspect (120°), which produces an easy, balanced and mutually supporting link between the signs involved. This can bring major benefits when there is clarity of intent and focus. If this is not the case the benefits will develop unconsciously and gained by whoever holds a clear intention.

Astroshamanic Seal: a square with a circle within including the pattern of a medicine wheel. It portrays Pahai Etnai, the vehicle of the Sacred Cone. I see a vast territory where everything is in its rightful place. A huge circle has been built. It comprises 12 villages and four large zones. All villages are linked by paths. It is a network of light and ecstasy. The original Game has been reproduced and in this place it is possible to return to the original stages of the Game. This is the sense of your work. When you have completed it, you can return home. In the meantime, enjoy yourself. Some will work at the periphery of the circle and will move around it, approaching the Centre. Build this project in all its details and ask contributions and support for its manifestation. Speak about it and be available to receive support. Create it wherever you go. Other places will be created. This is Pahai Etnai, the true starship, which you build in all its details. This is the nature of the Earth.

Martin Freeman, 6.2 (8 September 1971) English actor, famous for his roles as Tim Canterbury in the BBC’s Golden Globe-winning comedy The Office.

Ira Levin, 6.2 (27 August 1929) American writer. Being happy or unhappy – is that really the most important thing? Knowing the truth would be a different kind of happiness – a more satisfying kind, I think, even if it turned out to be a sad kind.

Nicholas Jonas, 6.2.5 (September 16, 1992) American singer-songwriter and actor best known as one of the Jonas Brothers, a boy band he created with his brothers Joe and Kevin.

Mother Teresa, 6.2 Macedonian-born Indian missionary; Nobel Peace Prize recipient. (26 August 1910 – 5 September 1997) “If you judge people, you have no time to love them.” “Not all of us can do great things. But we can do small things with great love.” “I am not sure exactly what heaven will be like, but I know that when we die and it comes time for God to judge us, he will not ask, ‘How many good things have you done in your life?’ rather he will ask, ‘How much love did you put into what you did?”