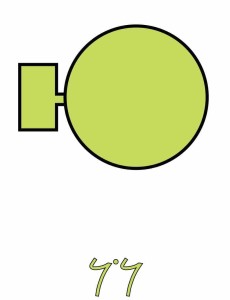 In the Astroshamanic Binary System Sun and Moon in Virgo (6) constitute Binary 6.6, or Binary number 66.

This is the exaltation of mutable earth. The spirits aligned with this pattern are very trustworthy, devoted, considerate and efficient, endowed with a strong sense of discrimination, allowing them to be very selective in their activities and professions, as well as with relationships, nutrition, healing and all pragmatic matters of life. Superficiality, triviality, and also heavy dramas or emotions are hardly part of their experience. They operate at their best when the intent and basic sense of direction have been set or are taken care of by others. In this way they can best focus their startling specialised working skills and produce impeccable, astonishing results.

This is a New Moon binary, ending the previous cycle started in Leo and beginning the Virgo cycle. Each lunar cycle starts with the New Moon, reaches its climax with the Full Moon and ends with the next New Moon. The degree and house where the Moon is located at the initial New Moon determines the energy and Intent of the entire cycle.

The previous New Moon set in motion a cycle based on Leo’s traditional associations with the heart and solar plexus. Here the questions were: “What allows me to open my heart and respond to its calling? What brightens up my eyes with love and passion? What am I called to express, create and display in the drama of life? What can I generously and playfully dispense to the world?” Leo is related to the Sun and reminds us that we are stars, unique beings with a role to play on the stage of existence.

The point where the previous New Moon fell in your natal chart gave clue on where the show started for you. The following Full Moon in Aquarius shed light on the areas where risk could be taken in the above respect. This New Moon in Virgo shifts the attention on the details and the pragmatic implications aimed at supporting the previous developments.

The degree of the New Moon, or Lunation point, indicates an area of life that will operate as Intent and driving force during the next cycle. Astrologically this position is first identified in the natal chart by noticing in which house of your chart is located and if there are planets nearby. The next step involves establishing a direct rapport with the Lunation Point by positioning in the corresponding Sector, staying there for at least five minutes and opening up to what comes to your mind, emotions and body, taking note of whatever calls attention, no matter how trivial or distracting.

In the subsequent days, as the Moon progresses in other signs, you can follow its path and position yourself in other sectors, opening up to further insights and taking note of them. As you do all this, I can be aware of the position of the Sun and of your experience on the binary relation of both Sun and Moon.

At New Moon a novel process is conceived. The seed is present at the Lunation point, yet it exists merely as a potential without definite shapes. The Moon is unseen, cloaked by the radiance of the Sun, and the seed abides hidden in the obscurity of consciousness. At this stage dreams or insights, and also prominent situations developing at a physical, emotional or mental level may provide indications about the upcoming process.

The New Moon sponsors a new awareness and a shift of perspective. The general questions here are: “What do I truly want?” or “What is my Intent?” With the current Virgo New Moon this may be a time of practical assessment, organisation and discrimination. Virgo questions in this respect could be:
What is truly essential in order to manifest what I have chosen to create?
What is unnecessary in this regard?
What needs to be amended and restructured?
What practical work is required to serve the Intent?

A major challenge in the Virgo process is to accept the limitations and imperfections in oneself, as well as in the environment. When I give myself permission to go into areas of crisis and consciously stay in the friction of that space, then the primary step of healing is set in motion and transformation decisively begins. Another crucial point here is pursuing one’s Intent, getting down to work and completing the desired task despite the limitations. This is one of the major lessons Virgo can teach.

At New Moon there is the opportunity of authentically tapping into the energy of your Intent. This may be encouraged through ritual practices and shamanic experiences, such as the Basic Ritual of the Sacred Cone, the Sacrament of the Bridal Chamber or whatever you choose to do of your own playful accord.

Here please be aware of the Intent, no matter whether it appears a childish fantasy to your ordinary mind or the outer social environment. This is not the time to be practical or concerned about how to achieve things. It is the moment to open up to your uncontaminated Intent, as you fully envisage it without limits. Later, as the cycle progresses, there will be chances to filter the Intent, understanding its practical implications and working towards manifestation.

Astroshamanic Seal: a circle linked to a small rectangular shape. This is a seal of most profound service and devoted work. It involves acknowledging the results of your previous six months of work, allowing the related resources to be available in service. These resources are ready to join the circle and be deeply shared. There is a sense of sartisfaction and accomplishment in working together with others and the wholeness entailed, having a common intention.

Frederick Forsyth, 6.6 (25 August 1938 in Ashford, Kent) English author, born best known for thrillers such as The Day of the Jackal, The Odessa File, The Fourth Protocol, The Devil’s Alternative, The Fist of God, Icon and The Cobra.

Leo Tolstoy, 6.6.4 (September 9, 1828 – November 20 1910) Russian writer, novelist, essayist, dramatist, philosopher, pacifist, Christian anarchist and educational reformer. Seize the moments of happiness, love and be loved! That is the only reality in the world, all else is folly. It is the one thing we are interested in here.

Jack Vance, 6.6 (August 28, 1916 in San Francisco, California) American mystery, fantasy and science fiction author. Most of his work has been published under the name Jack Vance. Vance has published 11 mysteries as John Holbrook Vance and 3 as Ellery Queen. Other pen names (each used only once) included Alan Wade, Peter Held, John van See, and Jay Kavanse.

Stevan L. Davies, (September 3, 1948) author and Professor of Religious Studies. His most notable work has been in translation and analysis of the Christian Gospels, especially the Gospel of Thomas. Jesus the Healer: Possession, Trance, and the Origins of Christianity (1995); The Secret Book of John: The Gnostic Gospel—Annotated & Explained; Gospel of Thomas: Annotated & Explained (2011).

William Wilberforce, 6.6, (24 August 1759, Kingston upon Hull, East Riding of Yorkshire – 29 July 1833) English abolitionist. Amazing Grace, a film about Wilberforce and the struggle against the slave trade, directed by Michael Apted, was released in 2007 to coincide with the 200th anniversary of the date on which Parliament voted to ban the transport of slaves by British subjects.