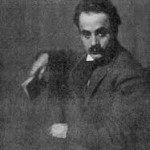 A friend who is far away is sometimes much nearer than one who is at hand. Is not the mountain far more awe-inspiring and more clearly visible to one passing through the valley than to those who inhabit the mountain?

Khalil Gibran: born on 6 January 1883, with Sun in Capricorn, Moon in Sagittarius and Ascendant in Sagittarius. Gibran is a mystical poet, novelist and artist. His best-known work is The Prophet, which is the story of a prophet, who after living in a foreign city for 12 years, decides to board a ship that will take him home. On the way he is stopped by people, to whom he teaches the mysteries of life.

Advance, and never halt, for advancing is perfection. Advance and do not fear the thorns in the path, for they draw only corrupt blood.
A poet is a bird of unearthly excellence, who escapes from his celestial realm arrives in this world warbling. If we do not cherish him, he spreads his wings and flies back into his homeland.
And ever has it been known that love knows not its own depth until the hour of separation.
But let there be spaces in your togetherness and let the winds of the heavens dance between you. Love one another but make not a bond of love: let it rather be a moving sea between the shores of your souls.
If you love somebody, let them go, for if they return, they were always yours. And if they don’t, they never were.
Work is love made visible. And if you cannot work with love but only with distaste, it is better that you should leave your work and sit at the gate of the temple and take alms of those who work with joy.

Alan Watts, born in Kent (England) on 6 January 1915, with Sun in Capricorn, Moon in Virgo and Ascendant in Sagittarius. Philosopher, writer, speaker, author of more than twenty books. For full details on Alan Watts click here.

John C. Lilly, Sun Capricorn, Moon Virgo, American psychoanalyst (6 January 1915-d.2001) American physician, neuroscientist, psychoanalyst, philosopher and writer. He was a researcher of the nature of consciousness using mainly isolation tanks, dolphin communication. Lilly was interested in the Search for Extra-Terrestrial Intelligence (SETI) project. With a group of scientists he developed the Drake equation to estimate the number of extraterrestrial civilizations in our galaxy. Amongst his works: The Center of the Cyclone, Simulations of God: The Science of Belie, The Scientist: A Novel Autobiography.

All human beings, all persons who reach adulthood in the world today are programmed biocomputers. No one of us can escape our own nature as programmable entities. Literally, each of us may be our programs, nothing more, nothing less…

Justin Welby (born 6 January 1956, 105th Archbishop of Canterbury and the most senior bishop in the Church of England, previously vicar of Southam, Warwickshire, the Bishop of Durham, serving for just over a year. Welby’s early career was in the oil industry. In 1989, he studied for ordination at St John’s College, Durham.

In the Anglican, Eastern, and Roman Catholic Churches the Epiphany is also a traditional feast held on 6 January, celebrating the divine manifestation of Jesus Christ to the three Magician-Astrologer-Shaman Kings, who brought the gifts of gold, frankincense and myrrh. In the United Kingdom the monarch still commemorates the day by offering gold, frankincense and myrrh at the altar in the Chapel Royal at St James’s Palace in London. For our featured article on the Epiphany click here.