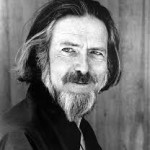 Alan Watts, born in Kent (England) on 6 January 1915 (10.6.9) with Sun in Capricorn, Moon in Virgo and Ascendant in Sagittarius. Philosopher, writer, speaker, author of more than twenty books,

Watts is a milestone in the investigation of the true nature of reality and alternative states of consciousness. Well-known autodidact, playful, outsider and eager spiritual researcher, he experimented with Eastern traditions, Christianity, psychedelic drugs, ecology, mysiticism and art.

His main concern was to create bridges (between East and West, spirit and body, etc.) and to move beyond the boundaries of human separated reality.

He was an explorer of the empty spaces, the void, nothingness, unveiling the close relationship between the visible and the unseen, and the human denial towards nothing as opposed to something. “I we spend a say sitting on the couch, or being unproductive… we say we did nothing, usually in a detrimental way. Society tells us we need to make something of our lives, rather than nothing…” And yet the something depends upon the nothing to be seen, just as any form cannot be seen without the empty space that surrounds it. Something and nothing are interdependent, and life cannot make sense if only one prevails.

He believed that life is a marvelous game based on what he called: ‘the hide and seek’ and ‘now you see it now you don’t’. Much of our human problems are due to the incapacity of understanding the game of life. Existence for Watts is a spontaneous process and the universe is at play. What frustrates spontaneity and the game of life is our human concern with time lines. The preoccupation with the past and future takes us away from the here and now, where the game of life is actually happening.

Please find below some quotes:

I have realized that the past and future are real illusions, that they exist in the present, which is what there is and all there is.
I owe my solitude to other people.
No valid plans for the future can be made by those who have no capacity for living now.
Some believe all that parents, tutors, and kindred believe. They take their principles by inheritance, and defend them as they would their estates, because they are born heirs to them.
Trying to define yourself is like trying to bite your own teeth.
Zen does not confuse spirituality with thinking about God while one is peeling potatoes. Zen spirituality is just to peel the potatoes.
It must be obvious… that there is a contradiction in wanting to be perfectly secure in a universe whose very nature is momentariness and fluidity.

Ego is a social institution with no physical reality. The ego is simply your symbol of yourself. Just as the word “water” is a noise that symbolizes a certain liquid without being it, so too the idea of ego symbolizes the role you play, who you are, but it is not the same as your living organism.

The greater part of human activity is designed to make permanent those experiences and joys which are only lovable because they are changing.