Brento (also known as Trent), or Brentrant Tresantrant Trent, is a Handorian State in the central mainland, traditionally associated with Sector 2 and the astroshamanic totem spirit of Rata Sahe Pah Sadoh.

The State capital and largest metropolis is Trent at the centre of the State. Other relevant metropolis and cities are Bec de Sanbeak, Bapian Hill, Bijini, Brendor, Bekruz, Okra and Ops.

The State of Brento is a predominantly plain and lowland country, with significant elements of diversity and varied topography in its southern are. The northern and central zones are a vast area of rolling plains and low hills, whereas the southern feature more pronounced hills and some considerable mountains, including various lakes and a narrow, yet most significant, access to the sea.

Agriculture, food production, architecture, art, banks and banking are vital sectors in the Brentian economy. The high quality and quantity of its agricultural products, thanks to the endurance of the Brentan most celebrated interdimensional seed, the Bijo,  feature Brento at the top within the Handorian State System, while contributing to the distinction of its prestigious cuisine and of its most celebrated dish, Le Toast du Sanbeak.

Brento is divided, according to the classic Handorian system, into a State Capital Territory and 12 Nations. Below the national level, Brento has a pyramidal ruling and administrative system. In descending order of importance are Regions (144), Provinces (1728) and Districts (20736).

The highest authority of the United Order of the Sacred Cone in Brento is the Primate of Trent (Trent Primata). The Order consists of the Archvicaries of Obrento, Ontrac, Ops, Brendor, Bekruz, Okra, Bekruz, Biltosh, Becrest, Bijini, Bapian Hill, Bond, Bec de Sanbeak. The Bastions of the Order are under the jurisdiction of the local Vicar and are each administered by an Archdean.

The Obrenta Pahai Sangai is the Obrento State Cone League. At the top of the League there are two divisions (Premier and First), followed by the Second Division (with two parallel categories) and the Third Division (with three parallel categories). Then there are the Obrento National Leagues with 12 parallel national divisions, and under them the Obrento Regional Leagues. The main squads are: Trent, Three Elms, Apian, Biltos, Okras, Bardetoiles, Ops Valets, Borne du Trent.

For visitors coming from the Human Arbitrary Configuration, Brento is particularly relevant for it holds an intimate resonance with the second and third dimensional bodies, shedding light on their multidimensional connections and promoting the release of its implanted separated components. Brento holds the original matrix consciousness of how the third dimension is generated through the interaction of the second dimension with the fourth and the fifth dimension. The invitation is to journey through Brento with this awareness, bearing in mind that Brento is devoid of any human arbitrary conditioning regarding the use of the physical body. Brento, as all other Handorian States, is a multidimensional reality, where the third dimensional body is totally connected with the other more subtle bodies. As a result there are none of the physical limitations that exist in the human separated reality. 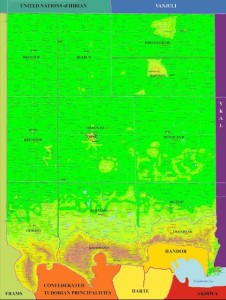 The Nations of Brento