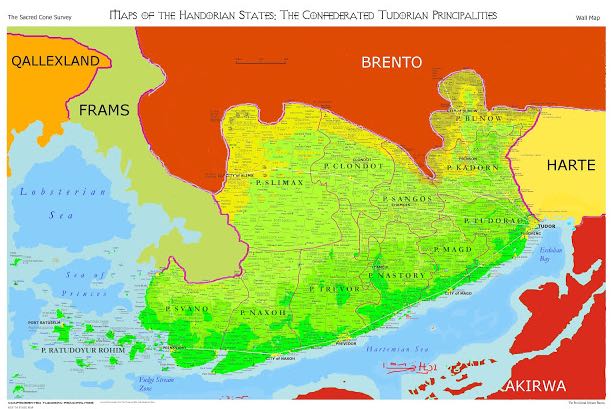 The State capital and largest metropolis is Tudor at the eastern end of the State, right at the border with the State of Harte, emanating as an uninterrupted continuation of the Hartemian  Hyper-metropolis. Tudor is a global city and multidimensional centre for communication, diplomacy and multiversal cooperation, because of the presence of various inter-universe organizations, including the headquarters of several agencies of the United Creations (UC). It is also the place where the first Handorian Interstate Treaty was signed, leading to the final establishment of the Handorian State System. The capital hosts The Tudors, which is one of the three top squads of the Sacred Cone Handorian League.

CTP is divided, according to the classic Handorian system, into a State Capital Territory and 12 Nations, whose Tudorian official term is Principality.  Below the national level, Tudors has an administrative system consisting in 144 Counties, 1728 Squares and 20726 Districts. CTP consists of 12 Principality Nations, each headed by a Trinity of Princes, or Rulers. The highest multidimensional authority is the Chamber of the Tudorian Principality, headed by the Paramount Third Sphere and presided by the Council of Tudorian Powers

The highest authority of the United Order of the Sacred Cone in Tudor is the Primate of Tudor (Tudor Primata). The Order consists of 12 Archvicaries. The Circles of the Order are under the jurisdiction of the local Vicar and are each administered by an Archdean. The Binary Totem Zone and Vicarial Zones have their own Vicar or Supply Vicar. Major roles in CTP are also given to Parsons. CTP hosts a very large number of Vicarial Zones and temples, all linked by a network of multidimensional sacred paths and pilgrimage routes.

The Principal Cone League is the Tudorian State Cone League. At the top of the League there are two divisions (Premier and First), followed by the Principality Leagues with 12 parallel national divisions, and under them the County Leagues. The main squads are: Tudors, Tudoring, Accumulators, Centurions, Cherubins, Paladins, Chamois, Trevor Palace, Peridot, Bunos 3, Cres, Kameu, Pneumatic.

Tudor is a realm of crucial management of the Game of the Sacred Cone, a basic network and communication key-point. This state plays a vital role in the traditional structure of the Handorian States System an in particular in relation to the third dimensional realm. It is also the emanation point of fourth dimensional lovers, the gateway to everlasting romance as it may be dreamt about on Earth. The firm union of such lovers is based on the uncovering of the third polarity, of which Tudor provides the keys. This is the State of the Winged Messengers, it is here where the angelic identity of the Handorian States System inevitably transpires. Tudorians are the rulers of the Third Sphere, operating as guardians, overseers, messengers, educators and inspiring agents for HAC. Their direct activities in HAC appear to overshadow those of other States.