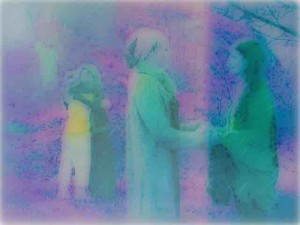 When approaching the theme of relationships from a spiritual and multidimensional perspective a most relevant question is:

Who and what is truly relating in a relationship?

If, as most spiritual seekers appear to concur, we are not physical bodies, then a relationship between two human beings, no matter how it comes into sight for us, has very little to do with the interactions between two physical bodies.

Relationships are not about meeting particular persons, as we identify them by their physical body, name, role and outer behaviour.

Relationships do not seem to be emotional interactions either. They are not ruled by emotional responses, by the fact of feeling in a certain way with someone, such as being in love, attracted, upset, angry, etc.

Emotional and physical responses are the mere echo of a much deeper rapport, which develops at the level of the mind. This is what is ultimately engaged in our relationships. Hence a relationship can be described as a mental activity, the result of two or more minds coming together, which may at times use bodies or emotions as vehicles for their mental interaction, yet only optionally and provisionally, and never as a requirement.

The term “mind” is used here to represent that part in ourselves that includes thoughts, awareness, intent, will and capacity to express or exercise choices. In its natural state the mind is at one with our core multidimensional identity, Spirit, i.e. the part that is connected with God,[i] through its identification with wholeness, the web of life, the sacred circle, etc.

This is seldom the case in our ordinary reality based on separation, where the mind is split in two parts: one that is in harmony with Spirit and the other that is in concurrence with the ego.[ii] This latter part, which originates the deceptive notion of an “individual mind”, is entirely illusory and deals only with illusions, such as our consensus reality, or human arbitrary configuration (HAC), in which it is totally absorbed. Yet, since these illusions show up in forms that seem  real, as long as we are in this world, they cannot be denied for they alone appear real.

The physical human body, as we speciously perceive it in our separated reality, is the primary deceptive form employed by the ego, a structure of flesh placed around the mind, an illusive cage aimed at demonstrating and preserving the ego’s paradigm of a split self.

This body relates exclusively to human beings and, as some shamans describe it, is a conglomerate of “energy fields which have been bent and contorted by a life-time of habits and misuse”,[iii] by deceptive belief systems and false perceptions.

The ego created this split physical body in order to corroborate a thought system based on separation, which also includes the assumption that there is no way out from this system. The consequence of this is that while on the one hand the physical body becomes a cult, with masses of worshippers both in the spiritual and mundane world, on the other, subtly or overtly, it is deeply hated and blamed as the cause of all pain. The ego employs the body as the major tool to fortify itself, as well as to condemn itself.

“The body is the ego’s home by its own election. It is the only identification with which the ego feels safe, since the body’s vulnerability is its own best argument that you cannot be of God. This is the belief that the ego sponsors eagerly. Yet the ego hates the body, because it cannot accept it as good enough to be its home. Here is where the mind becomes actually dazed. Being told by the ego that it is really part of the body and that the body is its protector, the mind is also told that the body cannot protect it. Therefore, the mind asks, <Where can I go for protection?> to which the ego replies, <Turn to me.> The mind, and not without cause, reminds the ego that it has itself insisted that it is identified with the body, so there is no point in turning to it for protection. The ego has no real answer to this because there is none, but it does have a typical solution. It obliterates the question from the mind’s awareness. Once out of awareness the question can and does produce uneasiness, but it cannot be answered because it cannot be asked”. (ACIM, T4.V:4)

With the term “body” we refer here to the physical human form as we commonly perceive it: a separated body, in competition with other bodies and disconnected from the wholeness of physical reality.

This body has nothing to do with the true physical world, which is a whole in itself, devoid of fragments of personal ownership. What the ego cherishes is the split body, the splintered physical form, a tool aimed at fomenting ongoing separation and conflict.

“It does so by using it to attack others and to seek physical pleasures. It adorns the body to make itself feel special and to attract special love partners. It uses the body’s sickness, aging and death to prove to us that we are frail and guilty and that God is dead. The Holy Spirit sees the body as neutral, as having no power over the mind. He sees it as a means not an end, as an instrument for reaching our brothers and extending love, forgiveness and healing to them. Thus it can be a useful tool here.” [iv]

Continue with Healing Relationships: Part 2 – My Body is not Me

[i] God is meant here as Core Multidimensional Identity, Wholeness, Undivided Self and Unconditional Love, and does not denote identification with a specific creed or gender. What counts here is the experience of God, rather than the term we employ. Hence if the term God causes grievances, please feel free to substitute it with another word. Yet here I wish to stress that deeper healing work, as I see it, is bound  to confront us with all grievances we hold towards the term God, as to any other term, with the aim of releasing them.
[ii] The term ego is Latin for I and is used in various contexts with different senses. Here ego refers to the entire psyche or individual self based on the belief of being a separate identity as distinct from others in its body, emotions, mind and spirit.
[iii] Carlos Castaneda, The Wheel of Time, Penguin, 1998, p. 159.
[iv] Robert Perry, A Course Glossary, 158 Definitions from A Course in Miracles, p. 5.