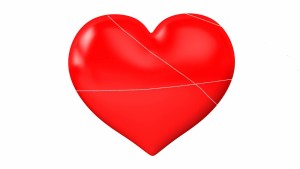 Fragmentation of the heart is a feature of the separate world we live in. It involves any type of relationship ending up with fights, betrayals, abuse or less dramatic, yet often even more painful grievances.

No matter whether we firmly believe in love, forgiveness, unity and peace, as long as we live in this world, we are going to experience hate, resentment and all kinds of unpleasant situations, causing pain and fragmentation. In order to heal we need to accept that fragmentation is the core feature of this reality, that the world we are in has been broken for ages and perhaps even from the beginning. When we accept this, then we can stop blaming others or ourselves, then can simply focus on the work of restoration aimed at making what is separate whole.

In order to carry out restoration we first need to ground our own identity into wholeness. We need to hold the awareness that, despite all the fragmentation that we experience in this world, in truth we are whole. We are all the fragmented parts put together, and unity is not something to be achieved. Unity is happening at all times, is the reality beyond the perception of separation that we experience in this world.

Yet, our perception is separate, and here this is the reality we face. We identify with split forms and bodies. As a result we regularly experience ourselves as being abandoned, wounded, betrayed.

We need to accept that our perception is separate, that we are fragmented in this world, and that on our own here we cannot do anything to restore unity. Only unity can do so.

Our task involves releasing our perception of separation while inviting the presence of unity to take its place. We cannot help feeling separate, angry, upset, hurt. It is normality in this world. Our healing function does not involve fixing our conflicts, it implies stepping back and allowing the conflicts to be healed by unity.

It takes two people to create a conflict, while in order to mend it you need three. As long as there are only two, separation and conflicts are inevitable and cannot be fixed. For conflicts to be healed the two have to invite a third party.

The problem is that the third party is not visible, it abides in the unseen, it is what connects the two. And the two are in conflict simply because they see themselves as separate.

As long as we acknowledge only our physical body, separation and conflicts are inevitable. The only way to unity abides in the uncovering of the unseen, the third party.